The VFRG was requested by E-33 to respond and advise on mitigation tactics to an ongoing Rectifier* fire at 62nd Ave South and South Ryan Street.  Upon arrival, E-25 was briefed by E-30 who reported that the fire was involving a large rectifier, approximately 10’ x 15’.  The rectifiers were located behind a cyclone fenced area and clearly labeled “Hi-Voltage”.  The VFRG officers performed a size-up of this situation and determined that an offensive posture could be initiated based on the following information: 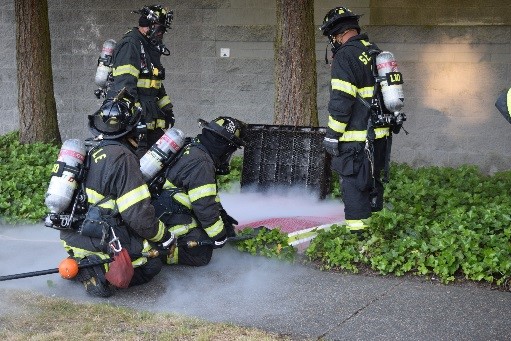 With a heavy CO2 deployment, cool conditions and wet concrete will cause ice/frost to form on the ground.

A rectifier is used to convert A/C current to DC current.  These are frequently associated with our Metro Electric bus lines, trolley systems and light rail.  They may be used for both High and Low voltage systems.  This system was supplied by Seattle City Light URD 26KV A/C primary line. 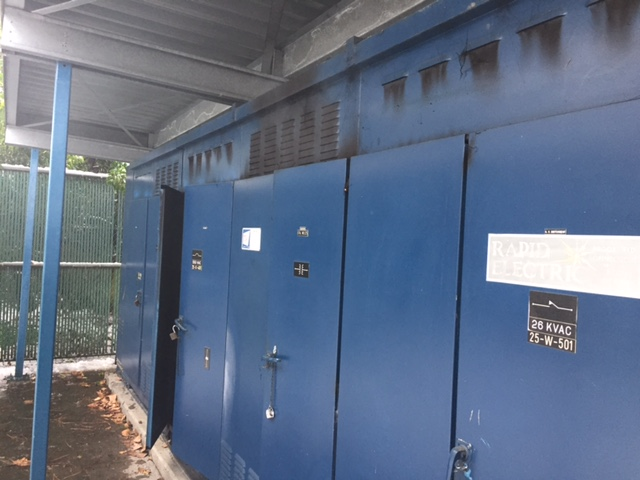 The rectifiers convert this to 1500V D/C power and supply a portion of King County Light Rail.  This fire caused a disruption in power to light rail. However, due to Seattle Fire Departments quick actions, the actual damage was minimal and power was restored much faster than initially  anticipated.  King County workers expressed their gratitude and appreciation to Seattle Fire members on scene.

Seattle Fire units responded to reports of black smoke from a sidewalk manhole/hatch this evening at 19:30. E-31 was the first SFD unit to arrive at the location and promptly requested a Vault Fire Response and initiated the Vault Fire SOG.

The Vault Fire Response Group arrived to find the scene organized with initial isolation area well defined by Seattle Fire units.  Access was provided for the VFRG units to the hazard area. Upon arrival, Lt. Barron and Captain Andrus confirmed the following: 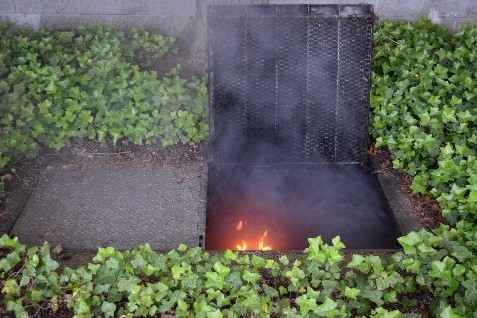 The VFRG recommended a defensive posture by SFD units.  B-4 had already assigned units to investigate attached structures for potential vault gas drift.

SCL line worker arrived shortly after the VFRG and began de-energizing vault at the pole-mounted transmission feed.  After completion, he requested that SFD extinguish the fire in the vault space. Chief Simpson and Lt. Barron spoke directly with SCL worker to confirmed that the space had been de-energized, however he was not able to guarantee that the space was “completely” de-energized.

The VFRG was able to extinguish the fire using their newly designed “low-flow non-conductive” CO2 nozzle.  100 lbs. of liquid CO2 was discharged into the vault and allowed to saturate for 5 minutes using the KOA tarp.

The fire appeared to be confined to the J-connections involving secondary lines only.  The URD transformers located inside the vault were undamaged due to the quick response by SCL worker and the SFD units. 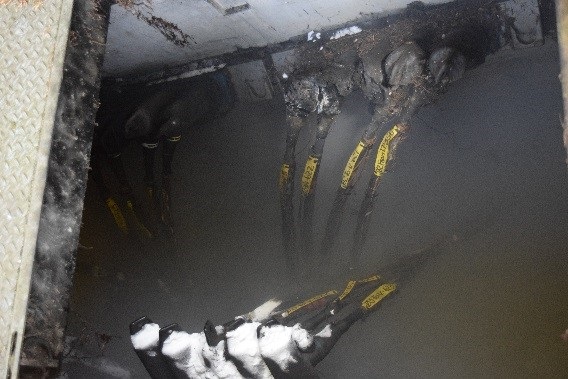 Fire confined to J-connections at top of vault, Ice from CO2- bottom of photo.

It is worth noting that de-energizing the space did not extinguish nor did it slow the fire activity in the vault space.  Had it been allowed to burn longer it likely would have involved the transformers, substantially increasing the cost SCL equipment and increased power loss time for service area.

Describe the Scene:
Requested by E31 for a reported vault fire. Early report was a 6’X8’ vault. The vault turned out to be a below grade, non-vented, feeder connection that fed a small cluster of buildings including a movie theater and grocery store.

A full vault fire response was dispatched. Command was originally established by E31, then transferred to B4.

Upon arrival, there was smoke coming from the hatch cover of the vault.

While in route, E25 requested a representative from City Light and Metro be notified.

City Light crew arrived just after the VFRG arrived. A quick meeting with them between Command and E25 officer, it was determined that they would disconnect power to the vault and the VFRG would apply Co2 to extinguish the vault.

Site Management & Control:
ICS functions had been assigned prior to our arrival including a perimeter around the vault. The VFRG team leader (E25 officer) conferred with B4 and City Light to establish a plan.

Identify the Problem:
This was a fire in the J-connection within the vault- underdetermined cause.

Hazard & Risk Assessment:
The primary hazard for this situation was the proximity of the burning 15,000 volt wires to the sidewalk surface. The burning connection (J-Connection) was approximately 12” below grade, making proper application and control of the C02 wand very critical to crew safety.

Termination:
Upon completion of C02, monitored vault for latent heat.