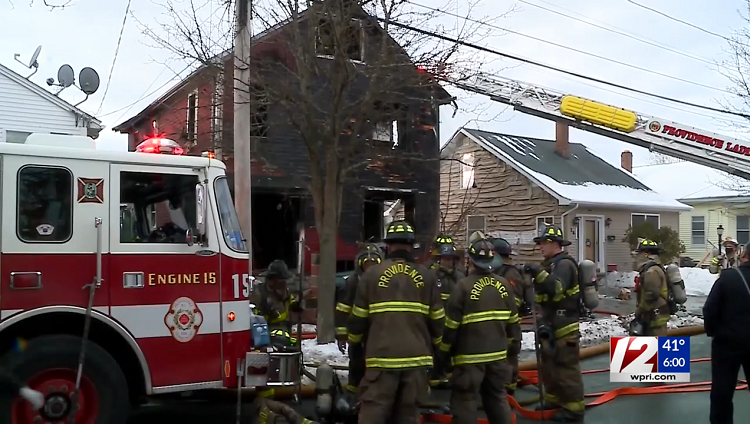 PROVIDENCE — A 7-year-old girl rescued along with her 2-year-old sister from a three-alarm fire in the Mount Pleasant neighborhood died shortly after arriving at Hasbro Children’s Hospital on Tuesday afternoon, a police official said.

Deputy Police Chief Thomas Verdi said the 2-year-old was in critical condition. The mother of the two girls was transported separately.

The first firefighters to arrive after the alarm around 1:30 p.m. found flames engulfing a house at 10 Lucy St., and the fire spreading to houses on both sides of it.

Attacks began on all three fires, then word came that children might be trapped inside the middle house. Deputy Assistant Chief Stephen Houle sent a company to find them. Fire damage and flames kept them from using the front and back doors. They went over a ladder to enter though a second-floor window, Bates said.

“I think the kids were on the second floor when we found them,” Bates said. “They were unconscious.”

He said visibility was zero. “You just start searching, crawling around searching with your arms, sometimes with a thermal imaging camera.” The girls were found pretty quickly. “They didn’t have a lot of time” before it got so hot that firefighters couldn’t keep searching.

It took 59 firefighters about a half-hour to bring the blazes at all three houses under control.

“Our people did an outstanding job,” Bates said. “It was a complex operation with three houses going, and then people inside.”

Verdi praised the firefighters who searched for the girls. “Their efforts were heroic. They risked their lives entering the building. Someone said there were children inside, so they immediately entered, found the children, and rescued them.”

He said it was unusual for an afternoon fire to be so far along when detected. Fires at night can go undetected while people are asleep, he said, but during the day fires are usually caught early. This one “spread very aggressively, very quick.”

Firefighters were somber when word reached them that the 7-year-old had died. “It was emotional,” Verdi said. “Life knows no greater calamity than the death of a child.”

“Let’s just pray that the 2-year-old survives” with no lasting injuries, Verdi said.

“These are the runs that affect people most,” Bates said. Counseling is offered “after calls like this,” and sometimes the “officer who is very well-trained at this” will reach out to everyone in the company who dealt with it directly.

Police and fire investigators are both working on determining the cause of the fire.