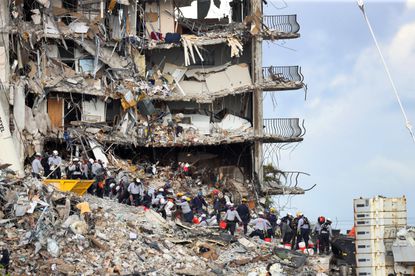 First there was a tremor. Then eerie groans followed by two jarring booms. At 1:24 a.m. Eastern time on June 24, the towering Champlain Towers South in Surfside, Florida, gave way, reducing 12 stories of condo units to a heap of concrete, steel and the shattered remains of dozens of people and the homes they lived in.

Most of the residents were asleep in their beds, but even the night owls who were awake didn’t stand a chance. In seconds, it was over.

But the timeline of the tragedy at the 40-year-old tower didn’t begin at the moment the tower fell. The signs and warnings of a weakening building began many years earlier – possibly 10 years or so after its first residents moved in.

It may take months, if not years, to get to the bottom of what could end up being the deadliest accidental building collapse in U.S. history.

Here’s what we know for now about the ill-fated Champlain Towers South:

The north and south towers are completed along Collins Avenue at 88th Street in Surfside.

Seawater in the garage: William Espinosa was overseeing maintenance at the Champlain. He told WPLG-TV after the collapse that 1 to 2 feet of saltwater would rush into the underground garage after especially high tides. He said he reported the problems at the time but was told water coming into the garage had been going on for years.

An inspection report gives no hint of imminent danger during the city’s annual “minimum building standards” check on the property, according to city documents. The report mentions peeling paint, holes in a stairwell wall and water in the garage – nothing that would raise flags.

An alarming engineering report warns that the concrete slab beneath the pool and entrance drive is not sloped as it should be, allowing water to pool. The standing water is significantly deteriorating the concrete, the report states. A consulting firm hired by the condo association’s board estimates repairs at $9 million, according to documents obtained by the Miami Herald. The company that made the report told the Herald that previous attempts by contractors to repair cracks in the garage “were ineffective” and didn’t fix the problem.

“Failure to replace the waterproofing in the near future will cause the extent of the concrete deterioration to expand exponentially,” says the report, which was signed by Frank Morabito, the consultant company’s company’s president.

Residents are told the condo tower is “in very good shape” by Surfside’s chief building inspector during a meeting of the condo association, according to minutes of the meeting obtained by the Herald.

Damage in the garage has gotten significantly worse since the 2018 engineer’s report, Jean Wodnicki, president of the south tower’s condo association, writes in a letter to residents. The seven-page letter, which was obtained by USA Today, outlines major repairs needed for the building. “When you visually see the concrete spalling that means that the rebar holding it together is rusting and deteriorating beneath the surface.”

Morabito Consultants, the same engineering firm that conducted the 2018 inspection, recommends significant repairs in the tower’s pool area and foundation as part of the 40-year recertification process, according to the Herald.

A pool contractor documents problems in the tower while putting together a bid for possible restoration work, according to the Herald. The contractor, whom the Herald did not name, takes photos of cracking concrete and corroded rebar beneath the building’s pool deck.

Sometime after 1 a.m.:Resident Cassie Stratton phones her husband, who was away on a business trip in Denver, telling him the building just shook. While on the phone, Stratton tells her husband, Michael, there is a sinkhole where the pool deck should be.

Around the same time, other witnesses describe hearing alarms going off, a rush of wind and jarring booms, similar to a sonic boom from a military aircraft.

1:20 a.m.: Rescue and hazmat units are dispatchedto 88th Street and Collins Avenue in Surfside to investigate a report of a garage collapse.

1:24 a.m.:In two phases that are seconds part, much of the 12-story south tower collapses.

1:34 a.m.: The incident commander declares the scene a Level 5 Mass Casualty Incident, which is used when there is the possibility of over 1,000 victims or if local resources are likely to become overwhelmed or exhausted. “Start setting up an area for the walking wounded,” someone calls out over the radio.

1:38 a.m.: Rescue workers are told to keep a safe distance by the incident commander, who reports that the remaining standing portion of the building is at risk of further collapse. Units on the scene report seeing people on the balconies of the remaining portion of the building with no way to escape. “Stand your ground, keep in a safe spot. We will get to those individuals. Notify them as best as you can at this time,” a commander calls out over the radio.

Around 2 a.m.:A man walking his dog hears the cries of a boy from the rubble of the building. “Keep yelling so I can follow your voice,” Nicholas Balboa, 31, called to, Jonah Handler, 15. Balboa saw Handler waving from the debris, according to The Associated Press. Handler’s unit was on the 10th floor and Balboa, along with others, pulled the boy from the rubble – a firefighter carried him to safety. Handler’s mother, Stacie Fang, died.

Jonah Handler is the only person pulled from the rubble field tosurvive to date, though 35 people whose units were still standing were safely rescued.

By day 6 of the search and rescue, 12 people had been confirmed dead and 149 remained unaccounted for.

Search in Florida Collapse to Take Weeks; Death Toll at 90