In today’s fire service, we have never had better access to training and learning materials, but so often this access doesn’t not translate into better prepared officers. Like the excellent finish carpenter that leaves a company and strikes out on his own and fails, a company officer that was a great fireman may not have the skills to manage people. Just as the carpenter didn’t have the business skills to run a company.

Many of these new officers are ill equipped for leading their men and women into “battle”. They lack some of the basic skills in leadership and how to form a team. Unit cohesion is vitally important in any organization. That cohesion begins with relationships and trust. It is developed through training and company activities like meals, fundraisers, family get togethers. This job is about people, the ones we serve and those we serve with. There are many ways to achieve this goal and many of our officers don’t know a few simple things to make it happen because they taught them. Too often new officers pass a test, are handed a badge and sent on their way. While there is certainly some personal learning and commitment to get that far, many are not afforded a structured training program that corelates with the values and mission of the department. Often other officers are appointed or elected. While these may be qualified individuals, the same system applies, and they are often placed in the right front seat with little or no guidance.

Getting promoted is a personal goal. While most do it with a view of making the department better, it is usually about money, status or success at some level. And that isn’t a bad thing. Sometimes it’s viewed as an escape from an assignment. Many excellent leaders promoted because they realized that it was good for their family. However, once you are promoted, it is no longer about you. Once you are promoted it is about the organization, it’s mission and your people. You come last.

Too often good aspiring officers get off track chasing “fame” and acceptance. They become so focused on making a name for themselves that they forget why they wanted to become officers in the first place. They forget where they came from and their role in the organization. Often getting promoted has more to do with being in the right place at the right time, compared to any other factor. Lots of qualified firemen don’t ever get promoted. Letting your success inflate your ego is often a fatal mistake made by new officers. These officers tend to forget the things they stand for, the people they supervise and the placing operational gain over personal gain or acknowledgement.

“Wherever we are, whatever we’re doing and wherever we are going, we owe it to ourselves, to our art, to the world to do it well. That’s our primary duty. And our obligation. When action is our priority, vanity falls away.” — Ryan Holiday — The Obstacle is the Way

One critical tool that all new officers can rely on is their senior man. Now this may different for department to department and your “senior man” may not be the longest serving. But every company has that go to guy, and as a new officer he should be your biggest asset. Now not all senior men offer a positive influence and a new company officer that is a huge challenge to overcome. But in the case of having a reliable senior man, the officer needs to develop that relationship. Like a new platoon leader must rely on the platoon sergeant to learn about the platoon, and determine the capabilities and needs are; the new company officer needs to listen to his senior man, to find out about the crew, their needs, abilities, strengths and weaknesses.

While the new officer cannot abdicate his responsibility or authority, he should listen and observe before instituting his plan. Some expectations must be laid down up front. Timeliness, preparedness, honesty….but other changes can happen over time, with the assistance and support of your senior man.

“To find the kinds of people with the type of on-the-ground knowledge that can enable us to understand and connect the dots, we have to imagine how to seek out and listen to them. It’s very rarely the self-styled expert or the academician, though both can make positive contributions to our knowledge base. Rather, it’s the person who has walked the specific ground, lived the specific lifestyle, and possesses a specific psychosocial mind-set whom we need.” Peter Blaber — The Men, The Mission and Me

For the Senior Man:

Remember your role and with the right support from your officers you can help lead the company or department to succeed. You may be asking how can a back-step fireman can effect such change? Quite simply by building trust with your officers. You have to be squared away in your skills and abilities, and you have to be the fireman that offers solutions and fixes problems. You must posses many of the same qualities as those that get promoted, your rewards will just be different.

Loyalty up and loyalty down must be the rule with your new officer. They must be able to know they can trust you and that you will deliver their orders as if they were your own, and they must have you back while you do so. This isn’t blind loyalty where things are covered up to prevent discipline. This is loyalty built on trust that the mission comes first and that you both have the best interest of the department and your people in mind.

Be prepared to do your job should enable the officer to allow you to help run the crew. This doesn’t mean you get a voice in everything that happens, as ultimately the officer is in charge and it is his responsibility. But by developing a positive relationship and earning trust, you will have a lot more influence on how things run.

For the Company Officer:

The make or break of all leadership positions is people. No amount of money or equipment will make any sort of impact without firemen to be there when the rubber meets the road. One of the most important tools any leader can use is communication. Listening is far more important than speaking, yet in studies it is documented that less than 10% listen effectively. Far too often we listen to reply, versus listening to understand. Steven Covey, in his book “The 7 Habits of Highly Effective People” states the following, “seek first to understand, then to be understood.” We all must overcome personal bias when listening. So often what is said is not what if heard.

As the new officer or senior man, it is critical that you communicate effectively. Often to ensure understanding, asking the other person to repeat back what you just said is necessary, especially with issues where complete understanding is critical. But if you are not on the same page then misunderstandings will occur, and you will be less effective as a team.

A mutual trust must be developed, and success is found in outcomes; both in the station and on the fireground. After every fire don’t be afraid to discuss the good and the bad. One of the strongest ways to build unit cohesion is to create an environment where there is enough trust that where everyone can admit negatives and positives of themselves and the crew without judgement.

“It’s been said that there are no mistakes in life, only lessons. Every mistake is an opportunity to ensure that we never make it again, especially when future consequences can be much direr.” Peter Blaber — The Men, The Mission and Me

You will make mistakes. On the fireground and in the firehouse. Acknowledging them is the first step in correcting them. Admitting you were wrong, and then correcting your actions will go a long with in building trust. No one is perfect, and no one expects perfection from everyone. Being honest and humble will make you a much better leader.

When in charge be in charge. Far too often new officers are reluctant to step up. They are more concerned with how they will be perceived and less focused on their responsibility. You cannot be everyone’s friend, and that should not be expected. Most firemen will prefer an honest, fair leader than one that caters to their personal needs.

History often only remembers the act, not who achieved it. And while some legends exist it usually isn’t because of self-promotion. A focus on the mission, while developing competence and confidence in your crew will go a lot farther in establishing your reputation than any other single act. So, put your head down and keep pressing on. Stop worrying about who is receiving recognition and focus on the results. Firefighting is a team sport and we are only as good as the worst player. Making sure you crew isn’t the worst player is the most important function of the company officer. The true measure of our effectiveness will be the legacy we leave behind and the fact that we left our department better than we found it.

Vires acquirit eundo (We gather strength as we go) 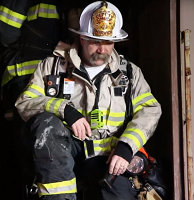 Dave LeBlanc is currently a Deputy Chief for Fire Department in the Northeast, Dave’s Fire Service experience spans three decades including having worked as a call firefighter, a volunteer firefighter, a career fire alarm operator, fire fighter and company officer. Dave currently teaches as an adjunct instructor for a local community college, has worked as a fire academy instructor and presented and the New England FOOLs Northeast Fire Summit. Dave is married and the father of two daughters.

Kelly Lemmons was born in Vicenza, Italy. He is the Deputy Chief of the Colonial Park Fire Company and a firefighter/EMT for the Defense Logistics Agency.  Kelly has served over 19 years in the PA Army National Guard, 15 1/2 of those years he served in the Long Range Reconnaissance Unit as a Team Leader. He is currently a Staff Sergeant serving as an Infantry Advance Leaders Course Instructor. Kelly was awarded the Purple Heart due to injuries sustained while conducting combat operations in Iraq in 2005 – 2006.