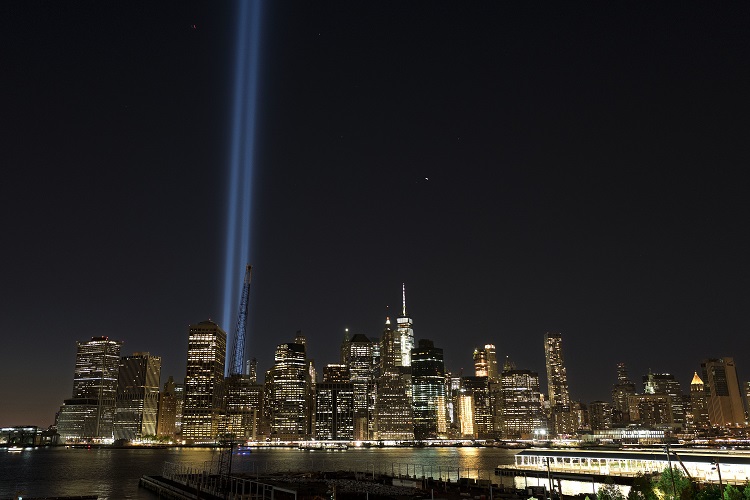 Sep. 10—The first thing that struck Knox County native Paul Doughty as he arrived in lower Manhattan around dusk on Sept. 11, 2001, was the silence.

Doughty and his fellow team members in FEMA’s Urban Search and Rescue Massachusetts Task Force were mobilized within hours of the planes hitting the World Trade Center towers. As their convoy made its way toward the site of the attacks, Doughty noticed that the usual thrum of commerce and city life was gone. A thick layer of fine dust covered every surface, like toxic snow. There was only wreckage, and quiet — disturbing quiet.

“There’s only one word I could use to describe it: surreal,” said Doughty, 56, a native of Union, who is now retired and living in St. Albans after a 32-year career with the Providence Fire Department in Rhode Island. “The World Trade Center buildings were just gone. It was a demolition site. It was eerie. It was disturbing.”

Over the coming weeks, first responders from all over the country would descend on the city for one of the largest search and rescue missions in modern history. Doughty spent 10 days there, sleeping on a cot at the Javits Convention Center, working the night shift at the site. In a Bangor Daily News article about Doughty published on Sept. 17, 2001, he said that the work was grueling and exhausting.

Twenty years later, he still recalls it vividly. Though he says he’s lucky to have escaped without post-traumatic stress disorder or any of the severe health problems other first responders faced after working in such toxic conditions, memories do sometimes flood back.

“It was gruesome work,” he said. “On your hands and knees, crawling in tunnels deep down into the building. We spent a lot of time working in those voids, hoping beyond hope that we could find someone. But the stark reality was that there likely weren’t any survivors. And it turned out that there weren’t any.”

Of the 2,977 victims from the day of the attack, 412 were emergency workers, including 343 members of the New York City Fire Department. In the two decades since, hundreds more first responders have been diagnosed with or died from cancers and other diseases due to exposure to the toxic dust and debris from the buildings’ collapse.

Doughty said that for him and countless others in his field, the heroic actions of the firefighters who rushed into the buildings before they collapsed to try to save people galvanized a generation of first responders. They led to a temporary spike in new recruits for fire departments, according to Doughty and others in the field, though as with the rise in new recruits to the military after Sept. 11, it was relatively short-lived.

The standard that the New York City Fire Department set, however, lasts to this day.

“I think about the heroism of the NYFD, marching into those buildings, and knowing they were climbing to their death,” said Doughty, who grew up in a family of firefighters, including his father, who served in Union’s fire department. “When you look at duty and service and courage, that’s the high watermark for first responders all over the world. That’s the ideal you try to carry with you.”

Jeff Grinnell, now a lieutenant with the Scarborough Fire Department, was the fire and rescue chief for the Buxton Fire Department on Sept. 11. He said that the attacks changed things for firefighters, permanently.

“That was a turning point for the fire service nationally. For the fire service, it was almost our Pearl Harbor,” said Grinnell, who said he signed up to volunteer at Ground Zero, though he did not end up getting called to service. “I don’t care if you’re from New York or Buxton. You do it because you have a need for service. You want to go and help out.”

Beyond the renewed sense of service and sacrifice, the attacks also helped to modernize the fire service more broadly, all across the country.

“It helped to bring a sophistication and technical prowess to the field that you just did not see prior to the attacks,” Doughty said. “Especially for the rescue part of what departments do. Our skills suddenly became really important, not just for terrorism incidents, but for things like industrial accidents, building collapses, natural disasters, things like that. A lot of good came out of that renewed focus.”

Bangor fire Chief Tom Higgins, who has served with the department for more than 30 years, said that professionalism became the No. 1 priority after 9/11 — and that greatly increased federal and state funding in the years following 2001 helped to ensure that departments of all sizes were able to live up to that standard.

“Before then, our fire stations would often be unlocked. You didn’t worry about where you parked the truck,” Higgins said. “Now, we do a lot more planning about everything. Now you have to think about every sort of threat that could come forward in a given scenario. We are much better equipped than we used to be.”

This weekend, as communities across the state and the country gather to reflect on the 20th anniversary of the attacks, many firefighters and first responders will join their colleagues to remember the day with solemnity — and to remember why it is that they chose to serve in the first place.

“Even though, 20 years on, an event of that magnitude hasn’t happened since, you see its impact in all sorts of ways,” Doughty said. “You’re not assuming that something like that will happen. But you are prepared for it if it does. It’s still something that’s etched in our memories, and still affects us to this day. It really underscores why we do what we do.”

Two Duncan (SC) Firefighters Sent to Hospital After Crash; One Gets Surgery