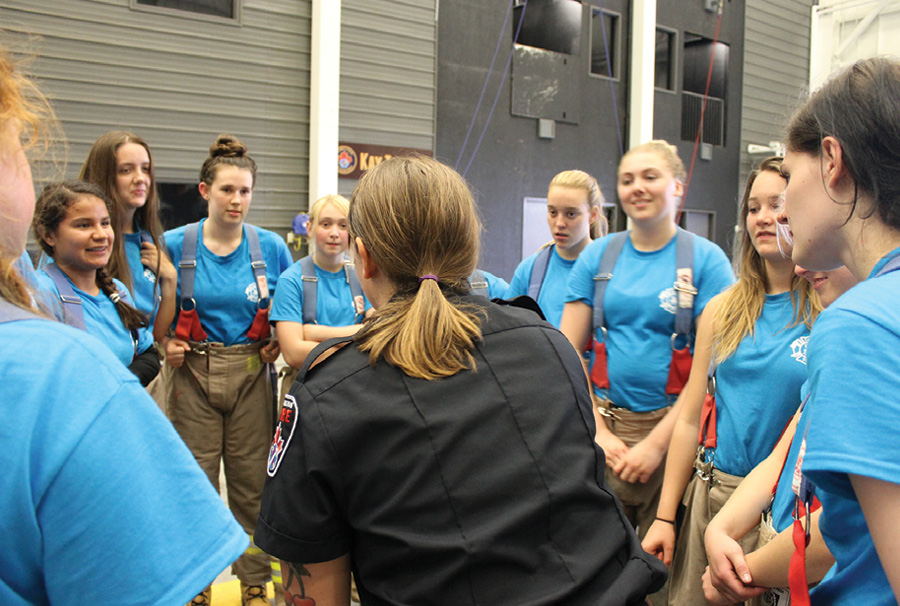 In October 2017, 14 determined young women, ages 16 to 19, spent three days training with the Hamilton Fire Department in Ontario, Canada. None of them were firefighters. At least, not yet. But the program they attended during Camp Female Firefighters in Training (FFIT) at department facilities in Hamilton provides enrollees with a rare opportunity. They can develop emergency preparedness skills while getting a first-hand taste of the real-life duties of a firefighter.

It was an exciting, and character-building, time. As one attendee said, “I learned so much from this camp! It really built up my confidence and helped me overcome my fears.”

Camp FFIT was introduced to Hamilton by city firefighter Pike Krpan three years ago. The program is modeled after similar camps held in Ottawa and elsewhere in the province and is supported by Fire Service Women Ontario.

Krpan, in fact, is ideally suited for her role as an advocate for more females in the fire service. She gained advanced skills in training and tactics at the Fire Department Instructors Conference (FDIC) International, a weeklong intensive experience that she attended in 2015 on a fully paid scholarship from Honeywell and DuPont.

As Krpan explains, the camp is designed to expand young women’s knowledge of the service and to support their interest in possibly pursuing firefighting as an exciting and fulfilling career. In addition, “We hold the camp during Fire Prevention Week. We invite the young women who participate and their families and friends to our training facility, get them thinking about firefighting, and get them to be more conscious about fire safety–which is a huge benefit. You know, most fires are completely preventable, so any opportunity we have to educate the public, we take it. We’ve had the wholehearted support of our chief on this from the very beginning,” Krpan notes.

Camp FFIT offers a fully immersive experience, with three days of hands-on, physically, and mentally demanding learning. The training is real and intense. It covers donning firefighter gear, including the use of self-contained breathing apparatus; operating hoselines; ladder handling and climbing, including aerial ladder work; search and rescue operations; fire communications; practices in fire prevention; medical call demonstrations; rappelling down a building for a rope rescue; and instruction in health and fitness management. 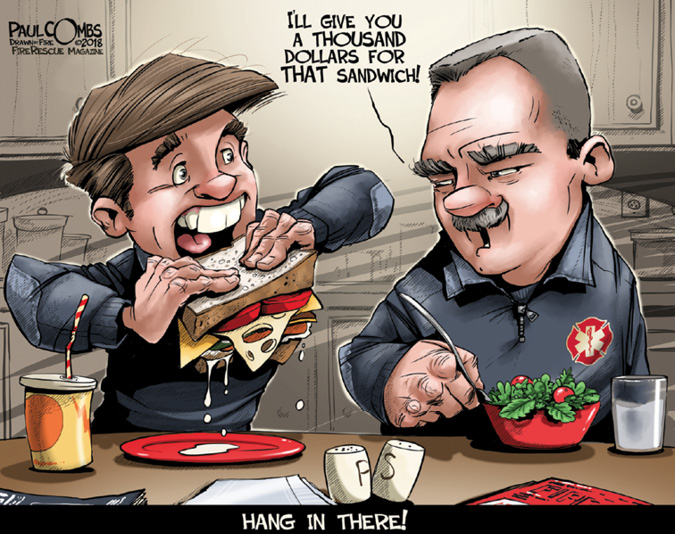 Krpan says, “I tell the girls on the first day that we are going to ask them to try things that might challenge them, even scare them. Things that will push their limits. Of course, we would never ask them to do anything unsafe. But we put them into dark, small places and ask them to find their way out wearing full gear, navigating through smoke-filled mazes, and climbing 90-foot ladders.”

It can all help the campers find the fire inside. Says Krpan, “I always tell them, ‘If you don’t want to do anything, just tell us. It’s always up to you.’ But I have never had a girl say no to any activity. It doesn’t mean they’re not afraid: I see some of them shaking. But they all try it. They all want to leap. Even when sometimes they fail, or they don’t do a task very well, they may say, ‘Can I try it again?’ So, they don’t give up.

“And you know, despite misperceptions some people might have, women are strong, mentally and physically. In this camp, I saw a young woman pick a 175-pound dummy up from the ground and drag it 50 feet. She’s 17 years old, and I watched her do that–to the cheers of all her friends.”

All Camp FFIT activities are led and supervised by qualified city firefighters who also field three days of question-and-answer drilling from the campers. These instructors are inspired as well.

According to Krpan, “All of the firefighters who volunteer at the camp have an opportunity to learn from each other. But, most importantly, they get to share what they know with some eager students. It’s fun to show someone what you do and to see that new passion when people are just learning things for the first time.”

Attendees really seem to appreciate the instruction and to relish the opportunity. Their reactions include comments like the following:

– “The trainers here were so welcoming and open to questions and to telling us everything they loved about the fire service.”

The camp is helping jumpstart a trend. Over the past decade, women have applied in increasing numbers to the fire service. Their varied reasons for doing so are echoed in the motives of Camp FFIT attendees. Krpan says, “A lot of the young women are already really dedicated, motivated community volunteers. There were lifeguards in the group. I know others from this year are already on the path to becoming first responders. They’re all looking for a career that responds to their interests in community–building, physical activity–and often family tradition. A lot of them have friends, fathers, uncles, or other family members involved in the fire service.” 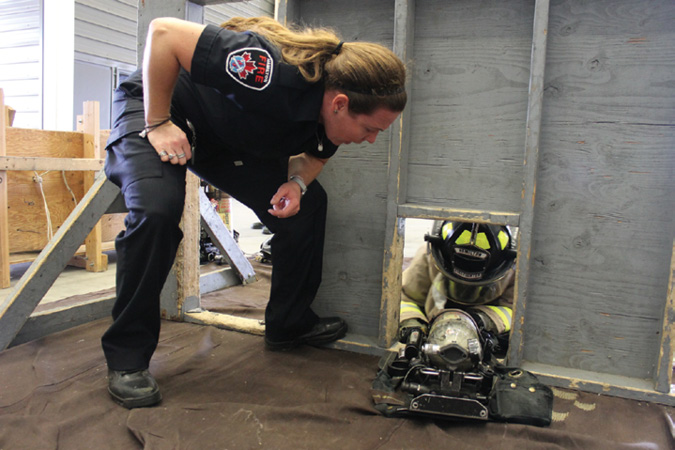 Firefighter Kelly Doyle encourages a recruit through a low-profile obstacle.

Although gains have been made, there’s still plenty of room for their numbers to grow. Fewer than four percent of Canadian firefighters are women,1 matched by about 4.6 percent in the United States.2 According to Krpan, that’s “way too few.” And it’s an issue she’s personally focused on resolving.

A four-year veteran of the Hamilton fire service, Pike Krpan works year-round to promote women in firefighting. In 2016, she received one of 20 full scholarships sponsored by Honeywell/DuPont to attend FDIC International, held each year in Indianapolis, Indiana. The world’s largest firefighter training conference, this event challenges attendees to bring their newly acquired skills and knowledge back to their departments and communities. 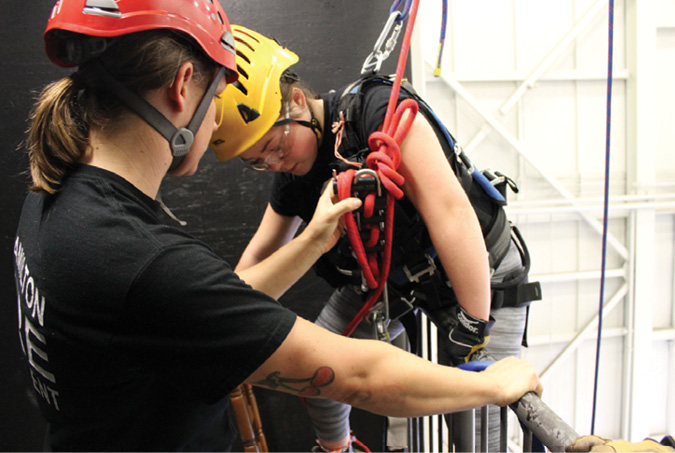 Firefighter Pike Krpan assists a recruit in setting up a rappel.

“It seemed like all of Indianapolis became a city of firefighters,” Krpan recalls. “It was such an opportunity to meet visionaries and leaders in the field, people who want to try new things, look to the future, and build a better fire service. Everybody was passionate about the service. Everywhere you went, there was someone to talk tactics with you!

“I’m still reviewing a lot of the material I learned at FDIC. I’m on a new committee in our fire service here in Hamilton to reassess some of our tactical firefighting methods, which I’m really excited about. I’m going to reach out to some contacts I made at FDIC to help my understanding of the new fire science so I can support my department in updating our methods.”

In fact, since she returned home, Krpan has generally stepped up her networking and organizing activities on a broader scale across her province. She was elected to the Board of Fire Service Women Ontario (FSWO) as vice president and is currently helping to organize the FSWO’s annual conference.

Another result: the continuing success of Camp FFIT, which jibes with the success of women in firefighting more broadly. Pike Krpan is pleased–and optimistic.

“A few girls who have taken the camp so far are already further involved in firefighting training programs. One who attended the first year is now a working volunteer firefighter in our department. And I see more senior women here advancing to captain and to chief positions. I see women making their mark in leadership positions all over the fire service. That’s exciting for me, too. Because I think we have something to add. And I think people are ready to see it now.”