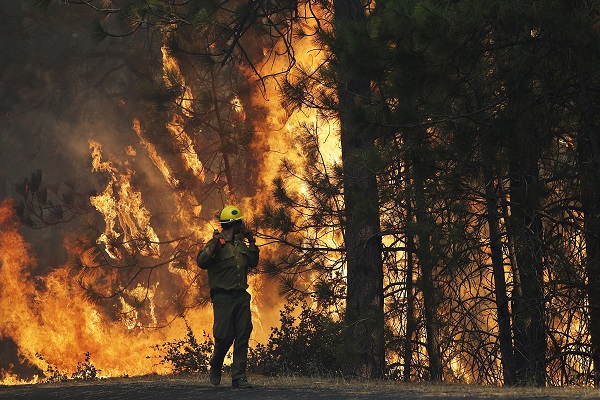 A fast-moving wildfire broke out Sunday afternoon in the High Sierra foothills, about 20 miles southwest of Yosemite National Park.

The River fire jumped from 800 acres to 2,500 acres in a few hours and was burning toward Highway 41, which leads to the Mariposa Grove and the southern entrance to Yosemite. By 10:15 p.m., it had burned 4,000 acres and was five percent contained, according to Cal Fire.

On a day of scorching temperatures, the River fire emerged as others burn in Northern California and Oregon, in what is shaping up to be an especially destructive fire season. A historically dry winter has created severe drought conditions throughout most of the West.

Driven by winds gusting to 15 mph, the River fire broke out at 2 p.m. and was burning in a southeasterly direction through dry grass and oak habitat toward the communities of Raymond and Coarsegold. The Madera County Sheriff has issued road closures and evacuation orders for residents in this rural portion of Madera and Mariposa counties. No injuries or structure damage have been reported.

According to a Cal Fire spokesperson, about 200 personnel were fighting the blaze. Helicopters and fixed-wing aircraft were making water drops. By late afternoon, the smoke plume had risen nearly 15,000 feet above the fire.

The River fire is the third-largest blaze in the state Sunday night. The Sugar fire has consumed nearly 83,000 acres north of Lake Tahoe in the Plumas National Forest, and the Salt fire in Shasta County has burned nearly 13,000 acres.

While no cause has been given for the River fire, it broke out as California has been under a punishing heat wave, with triple-digit temperatures reported throughout the state.

“We’re not too concerned right now,” said Patel, who recalled the Blue Jay fire that started last July and was not contained until November. It consumed nearly 7,000 acres and forced the closure of a portion of Tioga Road in Yosemite.