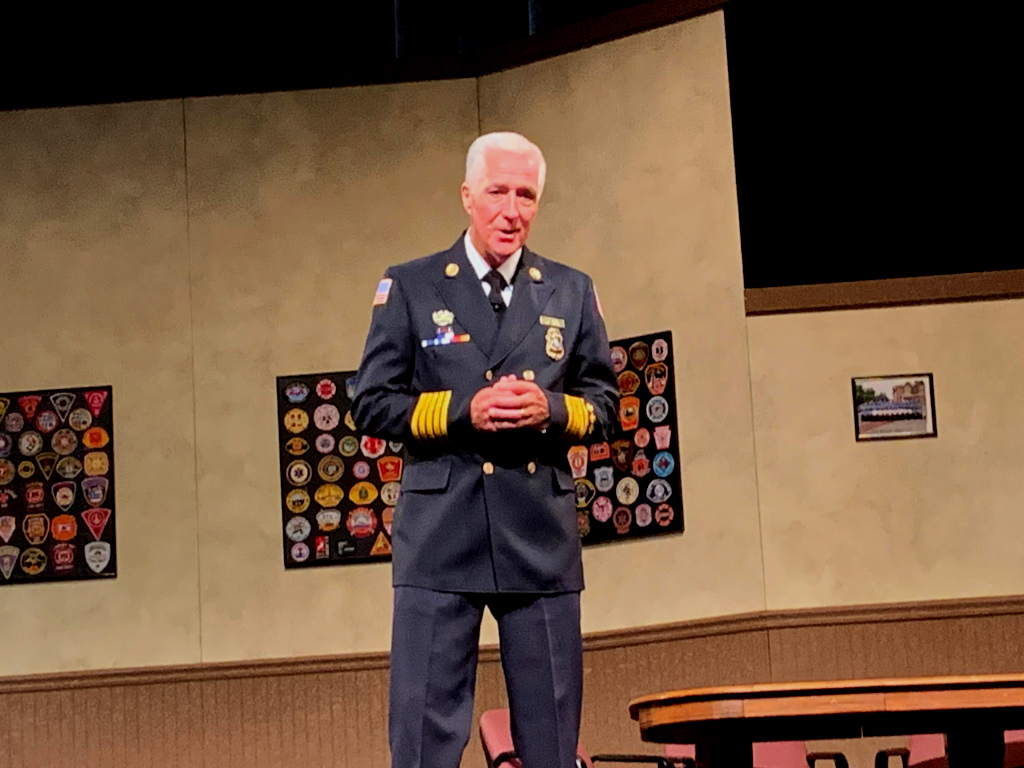 At the FDIC International 2021 Opening Ceremony in Indianapolis this morning, FDIC Education Director Bobby Halton spoke on “God and Country” to a standing-room-only crowd:

“The American novelist and author Elizabeth Elliot once wrote, ‘There is nothing worth living for, unless it is worth dying for.’

“That is a very powerful thought. It forces us to query our very purpose. It makes us question,

What do we live for?

“Without par, it demands we consider, What exactly are we willing to die for? Where do we find meaning? What is the purpose of our lives?

“It is the question we ask this morning, and not one lacking significance for this gathering. For our work, our purpose, is much more complex and nuanced than many have suggested.

“Having such clarity of purpose was perhaps said best by Captain Ernest Evans, who was the commanding officer of the USS Johnson. Evans earned the Congressional Medal of Honor for his courage and bravery during the battle of Sumar.

“In his fight talk, Captain Evans addressed his crew with the following words prior to their fatal deployment: ‘This is going to be a fighting ship. I intend to go in harm’s way. And anyone who doesn’t want to go along had better get off right now.’

“Likewise, this is the fire service. We intend go in harm’s way, and anyone who doesn’t want to go along had better get off now. Like the crew of the USS Johnson, it is fitting and proper that we also gather today not just as a profession but as a community of brothers and sisters who have freely chosen to stay on board and fight, fight against nature, fight against the randomness of misfortune, fight against disease, and fight against fire.

“We are ever more aware that, just like the sailors aboard the USS Johnson, it is not just what we fight against but, more importantly, what we fight for: Human dignity, honor, life itself, and the preservation of the handiwork of our fellow citizens. We fight for the principles and fundamentals that make America the greatest example of free persons exercising their God-given natural rights.

“And so, this morning, let us reflect, albeit far too briefly, on the irrefutable fact that our lives, our work, our purpose are connected, intertwined in many direct and indirect ways.

“We understand that what motivates us to serve is critical for our success.

“As school children, most of us read Victor Frankel’s ‘Man’s Search for Meaning.’ The message is simple: People, healthy people, require purpose and, according to Frankel, helping others is the most rewarding. Our work, our profession often supplies much of that need.

“It has been said that the work we have chosen is a lowly one. We agree with Chief O’Hagan. It is sufficient, however, to motivate persons like us to heights of valor and even to the supreme sacrifice, should the need arise.

“We lavish praise on people who parrot others’ words and reenact others’ lives on television, movies, or stage. We heap adulation on those who are skillful in sports. Many are wonderful people and excellent at what they do, and although famous, few are heroic, and fewer still are inspiring.

“Yet society elevates them over the troops who protect us, over the crews we do duty with, over the real heroes around us every day.

“It is not unusual for firefighters like us to hear things like, ‘I don’t know how you could do that’–‘that’ being our job. We usually just shrug it off, say something noncommittal like, ‘I just like helping people,’ or something funny like, ‘Firefighting is the most fun you can have with your clothes on.’ We generally are self-effacing and self-deprecating, not comfortable as the center of attention or being perceived as someone special.

“Unquestionably, we have our share of self-proclaimed heroes, mostly online Twitter and Facebook super firefighters. But most of us regular firefighters aren’t very interested in phony recognition, presumptuous virtue signaling, or any social media follows or likes. We are interested in training, education, operational growth so we can be better prepared and better equipped to address whatever is asked of us in the real world.

“It is not a trivial thing then to probe seriously as to why men and women who could easily be successful at almost any endeavor, and most assuredly suffer far less physical stress and strain, and who could surely make far more in compensation nonetheless choose to be firefighters.

“Firefighting has been called ‘The War that Never Ends.’ We may call God by different names but we pledge allegiance to one nation, to defend one constitution. Firefighters are one, one mission, one with each other, one with humanity. For in the War that Never Ends, we go daily under the shadow of death where we are all equal, where are all vulnerable, where all we have is one another.

“We know it is the influence of family, faith, community, and friends that is still the number one motivator in deeds of worth and honor–not power, nor dominance, nor collectivism. We know that national patriotism, honest love of one’s homeland, its people and places, its local traditions and local customs, not globalism, is what drives the engines of innovation and creativity the world over.

“And for us, the burden we accepted, the cross we chose to bear is the physical protection of humanity itself, it is the responsibility of a higher calling. Proof of this responsibility is at the forefront of every survey on trust, honor, and virtue, for at the top of those surveys every time are the firefighter, the warfighter, and the cop … every single time.

“To live up to this honor, we strive endlessly to deserve this recognition. We try to live in ways that confirm these archetypical images. We have been preserved, these many long years, in times of peace and war, prosperity and struggle because of persons of character, individuals of honor and fidelity.

“The American Legion has summed up in four words what it is that motivates these selfless acts of valor: ‘For God and Country.’

“For God and Country–that is a phrase we were raised with not only here in America but across the world in various nuanced themes. It explains why countless patriots have served in the armed services, law enforcement communities, and firefighting services the world over. We agree with Elizabeth Elliott that there is nothing worth living for unless it is worth dying for.

“We all feel our country is best and our firefighters the best. As firefighters, we understand what it means to have faith, spiritualism. We tend to hold fast to our faith. It buoys us in dark times, guides us in uncertain times, and reminds us to be humble, kind, and forgiving.

“Some people would call us simple because we love our nations and what they stand for. Some people will call us stupid for believing in an all-powerful God, a mystic energy for good without being able to prove it.

“Firefighters in this war that never ends strive unceasingly to protect anyone when they find themselves endangered regardless of their race, gender, politics, or religion. Humanity is first and foremost in all our endeavors simply humanity. The protection of humanity and the preservation of its endeavors are our fundamental principles.

“There are heroes around us right now. We are standing beside heroes right now, not actors, not athletes, not politicians, not pseudointellectuals, or presumptuous media elites. Firefighters, men and women, seek no recognition, seek no power nor fame. You are the real heroes whose very presence consecrates this hall–men and women who fully understand that the fire service is about fighting fire, fighting for others, intentionally putting ourselves in harm’s way like those who came before us.

“And when someone asks us, Why do we do this? We say … Because some things are worth dying for.